Draughts is a 2-player game

Set up is shown below: 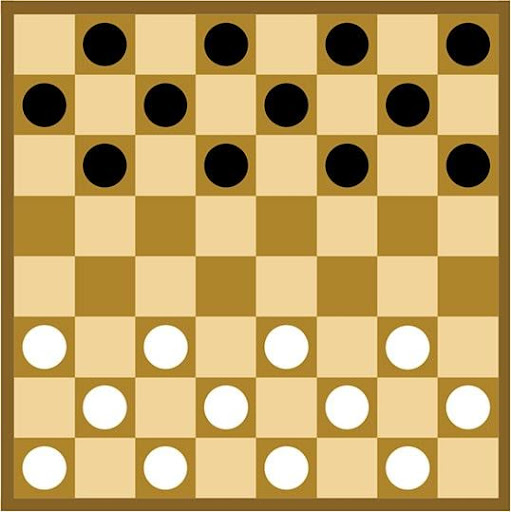 To Play
The object of the game is to capture all of your opponent's pieces or block them so they cannot be moved. Pieces are always moved diagonally, 1 square at a time, towards the opponent's side of the board. You play the entire game on the black squares - you do not need the white ones. Black always plays first. A coin is tossed to decide which player will be black. Players take turns to move a piece of their own colour.

Capturing
You can capture an enemy piece by hopping over it. Capturing is also done on the diagonal. You have to jump from the square directly next to your target and land on the square just beyond it. Your landing square must be vacant. The piece captured is removed from the board. If you are able to make a move that results in a capture then you must.

Multiple Captures
You can capture more than 1 piece on a single move so long as the jumping piece has vacant landing spots in between. You cannot take 2 in a row you must land and "take off" again. The pieces are removed. If you are able to make a move that results in a capture then you must.

Kings
If you can get a piece all the way to the other side of the board, that piece becomes a king. Place a previously captured piece on top of the existing one in order to distinguish it from your other pieces. This piece can move backwards or forwards diagonally. Towards the end of the game all the pieces will be Kings, which changes the strategy significantly.

To Win
Capture all your opponent’s pieces!